Lyme Regis is blessed with some of the most remarkable palaeontology and geology on the planet and the Fossil Festival celebrates this with a weekend of science, discovery and fun.

There's an abundance of activities for enthusiasts of all ages including walks, talks, theatre, music, exhibits and lots of hands-on science.

The history of fossil discovery is intrinsically linked to Lyme Regis through the incredible work of Mary Anning, immortalised even further with the release of the Hollywood movie “Ammonite” starring Kate Winslet and Saoirse Ronan which was filmed right here in Lyme Regis! Mary’s discoveries really shook the world of natural history; changing the way the scientific community looked at prehistoric life and the history of the earth itself. Her amazing story continues to inspire generations of fossil hunters and you too could follow in her footsteps and discover new secrets locked away for hundreds of millions of years by joining one of the many guided fossil hunting walks over the weekend.

The Fossil & Earth Science Festival will also host some fascinating exhibitions throughout the town centre including the Natural History Museum, British Antarctic Society, Palaeontological Society and lots of local scientific organisations, as well as some thought-provoking and entertaining talks and lectures in the Marine Theatre.

There's also an opportunity to purchase your very own fossil from the trading stalls. 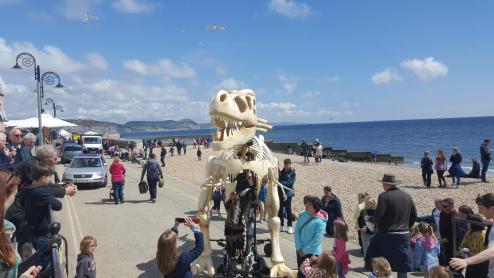